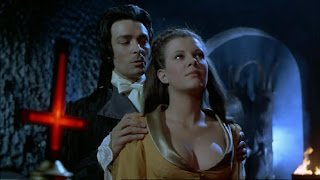 Though filmed after the death of Hammer's wizard production designer Bernard Robinson, TWINS OF EVIL (along with its original companion feature, HANDS OF THE RIPPER) stands out as the last of the company's horror films to evoke the sense of Gothic visual grandeur upon which its reputation was built. The art direction here is credited to Dragoljub Ivkov, a Yugoslavian whose previous credits include Dusan Makavejeb's MAN IS NOT A BIRD (1965) and W.R. MYSTERIES OF THE ORGANISM (1971), and his contribution is considerable; but the most potent contributor here is director of photography Dick Bush, now best-remembered as one of Ken Russell's ace collaborators (SONG OF SUMMER, SAVAGE MESSIAH, MAHLER, TOMMY, CRIMES OF PASSION, LAIR OF THE WHITE WORM), but who also shot DRACULA A.D. 1972 and WHEN DINOSAURS RULED THE EARTH for Hammer. Bush had a knack for sensuous color lighting, color contrast (as shown particularly well in the frame pictured), and velvety shadows that give this film extraordinary character.

Director John Hough (LEGEND OF HELL HOUSE, DIRTY MARY CRAZY LARRY) is often given credit for this, but if we look closely at what's happening with the film's structure and action and pacing, we get a clearer image of a helmsman in a bit over its head. There is the feel of a film that fell behind schedule and had to sacrifice some key scenes -- Gustav Weill's (Peter Cushing's) beating of his niece Maria (Mary Collinson) for the transgressive behavior of her twin sister Frieda (Madeleine Collinson) is alluded to only in dialogue, but sounds like a dramatically crucial scene -- and, likewise, some key moments topple over into risibility, as when Cushing invokes the title of the film, when the revived Mircalla (Katya Wyeth) reaches out during undead sex with her descendant to shag a candlestick with her free hand, when the underwritten hero (David Warbeck) wastes valuable screen time composing a frankly terrible song, or when the husky mute manservant (Roy Stewart) of the vampire Baron Karnstein (Damien Thomas) is reduced to "uh-uh, uh-uh-uh" dialogue to warn his master when the soldiers of Christ are storming the castle. One or two shots are actually filled out by repeating some footage in reverse. One also wishes there was more of Frieda, the story's most pivotal character, and that the film delivered more of the nudity and eroticism it promises. (It was made when the MPAA was at its most censorious toward horror films; it's doubtful the film would warrant more than a PG-13 today, but in 1972, it was not only rated R but had to be additionally cut to receive that prohibitive rating.) So it's not quite solid, but there's no denying that TWINS OF EVIL has many more advantages than either of its predecessors in the Karnstein trilogy, THE VAMPIRE LOVERS (1969) and LUST FOR A VAMPIRE (1971), both also scripted by Tudor Gates, and it is truer to the spirit of what Terence Fisher brought to Hammer's golden age than any film made after his enforced retirement.

Among the bonus features is Daniel Griffith's feature-length documentary THE FLESH AND THE FURY: X-POSING TWINS OF EVIL (84m), which is in fact a welcome history of Sheridan Le Fanu's "Carmilla" and all its adaptations to film. I am one of the talking heads in the movie, as are several of my most knowledgeable colleagues (Kim Newman, Ted Newsom, David J. Skal and John-Paul Checkett, to name a few). I attended a screening of it at Wonderfest; I thought it was a superlative piece of work, equally entertaining and informative, but also inspiring. Thanks to John-Paul's illuminating input in particular, I came away with reasons to want to finally read "Carmilla."

Viewed on Synapse Films Blu-ray, which contains a bonus DVD disc.
at 6:05 PM