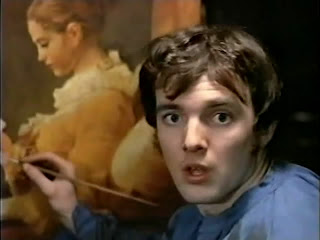 An old favorite I've seen numerous times, this is Ken Russell's biography of French sculptor Henri Gaudier-Brzeska, arguably the greatest sculptor France has produced, who died in World War I at the age of 23, focusing on his platonic love affair with the woman from whom he took his name, Sophie Brzeska, an aspiring novelist twice his age.

This was the last film Russell made in his contract with MGM/UA, which yielded most of his early classics: WOMEN IN LOVE, THE MUSIC LOVERS and THE BOYFRIEND, and it represents a deliberate downscaling in an effort to maintain artistic control. It was made for under a million dollars, featured actors known primarily for their stage work, and introduced a remarkable young lead, Scott Antony, whose charismatic, eruptive, ribald performance is perfectly complimented by that of Dorothy Tutin as Sophie, an impish schoolmarmish provocateuse whose aversion to physical love, the cause of their only unhappiness, lacks sufficient explanation (the script may here be cocking a snoot at her proposed novel about "Truth") but the chemistry they produce in their scenes together is such that we're swept off our feet by them anyway. Scripted by the poet Christopher Logue, a friend of Russell's who had portrayed Cardinal Richlieu in THE DEVILS, this is not only a winning love story, it is a moving ode to art and nature that ranks with Ptushko's THE STONE FLOWER and Tarkovsky's ANDREI RUBLEV as one of the most passionate and persuasive films ever made about what it means to be an artist. With Helen Mirren, who (to borrow a phrase from Michael Powell) strips off magnificently at one point in the film, revealing a body whose sculptural perfection at once mocks and rationalizes the impulse to capture such natural beauty in the permanence of stone.

Available online as a streaming download from different sources, but I recommend the Warner Archive DVD-R which is intact, anamorphic, and runs at the intended 24 f.p.s. speed, unlike the YouTube version (which carries a TCM bug, French subtitles, and runs fast at 25 f.p.s.).