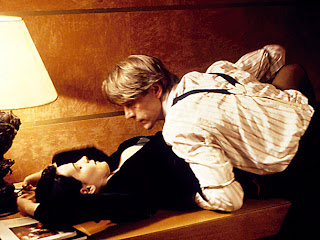 Louis Malle's penultimate film, scripted by David Hare (WETHERBY, THE HOURS) from a novel by Josephine Hart, is a tragic case of misjudgment in a significant directorial career. Jeremy Irons stars as a former doctor, now a member of Parliament being courted for Minister of Health, who experiences an uncharacteristic and destructive passion for a young Frenchwoman (Juliette Binoche) who is dating his son; she entices him into believing their relationship can continue even after the other relationship leads to an engagement, and tragedy inevitably ensues.

The two leads could not be more unappealing or cold -- it's like "Boris Karloff, meet Eva Braun" -- and there is nothing at all subtle about what happens between them; as every still of Binoche and Irons together in the movie readily attests, their mutual irresistable attraction brings them together in frosty friezes of stiffened limbs, yoga positions, and the most selfish of orgasms -- and never so much as a discernible glimmer of joy. You've never seen a sadder blowjob. One interesting point that the film conveys late in the game is that these things sometimes happen between people for reasons that are purely chemical and transient. If they were to meet at any other time, they might well regard one another as no different than anyone else.

The reason to see DAMAGE is Miranda Richardson, who takes advantage of this film's chilly, emotional vacuum to let rip with a couple of the rawest, most vivid expressions of anger and grief you're likely to find in English-language cinema. Her work here received Academy Award and Golden Globe nominations and won her the BAFTA Award for Best Actress in a Supporting Role. Leslie Caron also makes an impression in her brief appearance as Binoche's mother, governing her family with more authority than Irons, a supposed politician of some standing, is shown governing from his office; she projects a remarkable authority and insight into human relationships. There is also a lovely score by Zbigniew Preisner, who subsequently scored one of Binoche's best performances in Krzysztof Kieslowski's BLUE.