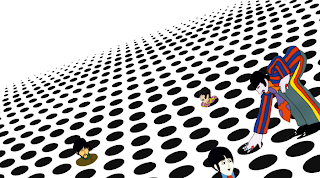 It's both hard to believe that this animated feature came from the same production facility responsible for the Saturday morning cartoon BEATLES series, and all too easy. On a story level, YELLOW SUBMARINE is pure cotton candy, so bold-faced about its very evanescence that it stops at one point to show us the seconds in a minute ticking away, but it does so so cleverly and stylishly that we can overlook the apt analogy of our pocket being picked one penny at a time. The rest is rejiggered L. Frank Baum and Peter Max, some Bob Clampett BEANY AND CECILisms, and allusions to Beatles songs, mythology and album cover art, all collectively pressed under some of the starchiest animation this side of UPA. Fortunately, producer Al Brodax and director George Dunning brought poster artist Heinz Edelmann aboard. His visual acumen gave their flat soda a graphic fizz and a soul of invention that never stops. Art deco, art nouveau, op art, pop art, it's all here and more, served up with an often sly sense of humor. While there are parts of the film that aggravate me, for not being more fluid or for not being more rich in character or narratively involving, I must admit that no other film has taught me quite so much about the value of color, nor of the world of art and its myriad possibilities. If it's a bit soulless, it still has the power to make me flush with emotion during numerous sequences (particularly the "Lucy In The Sky With Diamonds" segment), and according to the booklet stashed inside the Blu-ray, the many anonymous faces inhabiting the various setpieces were donated by the animators from family albums and other personal sources, making this a tantalizingly (and invisibly) autobiographical work on a textural level. The 4K digital restoration by Paul Rutan Jr., Triage Motion Picture Services and Eque Incorporated is endlessly appealing and gratifying.

Viewed on Capitol Records Blu-ray.
at 6:22 PM No comments: 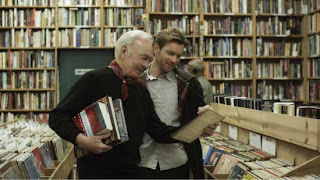 Mike Mills (THUMBSUCKER) wrote and directed this interesting autobiographical clutch of character studies, which won Christopher Plummer his only Academy Award for Best Supporting Actor. In a story that hopscotches forth and back in time, Ewan McGregor plays a graphic artist who is tentatively but happily entering into a new relationship with a mysterious actress (Mélanie Laurent, who seems to be channeling Nastassja Kinski) and reliving the story of how his father came out as a homosexual following the death of his mother, and then became terminally ill while embracing the first sexually rewarding relationship of his life in old age. Mills tips the sombre subject matter ever so slightly toward whispery, good-natured humor with ideas like subtitling McGregor's dog, and a surprise twist on McGregor's notion to pay on unexpected visit on Laurent's New York apartment; the gentle pressure he applies is generally just enough for us to gladly swallow the bitter with the sweet. Plummer is marvelous, Laurent is intriguing and McGregor, while low-key, is clearly relishing the opportunity to immerse himself in an unexceptional, down-to-earth character. In terms of the craft that went into structuring this story, and the freshness of the emotions and dilemmas it evokes, it's about as diverting as a not-overly-ambitious mainstream dramedy can be. 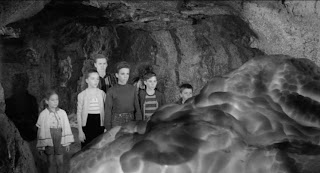 Jack Arnold's 1950s films for Universal-International pretty much define science fiction cinema's most seminal decade, but this, his last serious work in the genre -- again produced under the auspices of  William Alland -- finds him working with somewhat lesser-than-usual means for Paramount. Though his fans tend not to be very kind to it, Arnold felt THE SPACE CHILDREN was his best attempt at science fiction and, in retrospect, it stands out as perhaps the most forward-looking and politically-conscious of his films. In a story co-written by Tom Filer (who scripted the thematically similar BEAST WITH A MILLION EYES) and Bernard Schoenfeld (Robert Siodmak's noir classic PHANTOM LADY), six children from a coastline trailer park catering to the families of rocket engineers and scientists discover an alien life form on the beach that compels them to sabotage the top-secret mission code-named "the Eagle Point Project" -- the imminent launching of a six-stage defensive missile known as The Thunderer.

The pacifist premise is related in some ways to Robert Wise's THE DAY THE EARTH STOOD STILL, but everything else about the film looks ahead -- to the John Wyndham-based VILLAGE OF THE DAMNED and its sequel, and to Hammer's unrelated THESE ARE THE DAMNED, but also in a strange way to Barry Shear's WILD IN THE STREETS and, in the film's use of beachfront moonscapes and a pending sense of doom beyond the comprehension of the young, to Joe Dante's MATINEE, as well. Arnold's direction is perfectly assured and marries well to Nathan Van Cleave's eerie score, and the children include such familiar kid faces of the day as the Ida Lupino-eyed Michel Ray (THE BRAVE ONE), Johnny Crawford (THE RIFLEMAN) and Sandy Descher (the little girl who screamed "THEM!"), while the oldest and least experienced of these young actors, Johnny Washbrook, looks like the go-to fellow if you wanted to cast Marshall Thompson as a 14 year old. The adult cast, appropriately deemphasized for the most part, includes Adam Williams, Peggy Webber, Jackie Coogan, Raymond Bailey, Ty Hardin, Peter Baldwin, James Douglas and a stand-out role for Arnold favorite Russell Johnson, who in relatively little screen time etches a memorable character: an out-of-work trailer dad who has turned to alcohol and domestic tyranny to assert his faltering manhood. 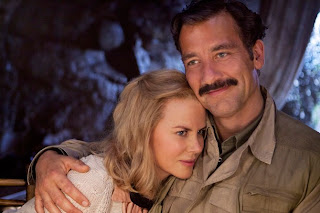 2.5 hours of obnoxious, loud, hard-drinking, hard-screwing Americans, speaking almost entirely in aphorisms while using their bullish American celebrity to win private audiences with foreign leaders and dance with death on the frontlines with bona fide freedom fighters of the Spanish Civil War and, later, against the inhumanity of Chinese imperialism. Is anything that either of these protagonists wrote about these anti-fascist struggles, in long-dead magazines like COLLIER'S, as well remembered or as useful to life today as Hemingway's least important fiction? It's annoying to see the lasting value of the novel so demeaned and trivialized, and to have suggested that Hemingway did most of the decent things he did in order to get hard, drunk or laid, but somehow it's still worse to see Clive Owen and Nicole Kidman (who are good, don't misunderstand me) CGI-horned into old newsreel footage; it makes a cartoonish trick out of real heroism and real suffering. I was surprised to find Philip Kaufman, director of several abiding favorites, behind this. P.S. Anyone who has actually read the USA TRILOGY or other brilliant works by the fine American novelist John Dos Passos will revile his treatment here, in a deliberately weak-wristed David Strathairn performance. Impressively, if sometimes perversely, cast all the way down the line: Robert Duvall, Molly Parker, Parker Posey, Jeffrey Jones, Diane Baker in a non-speaking walk-on, with Metallica drummer Lars Ulrich as film director Joris Ivens and former INVASION OF THE BODY SNATCHERS star Brooke Adams as "Madrid Woman." 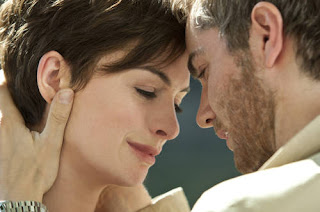 Formulaic but not uninteresting idea, scripted by David Nicholls from his own novel, that suggests SAME TIME NEXT YEAR redone for a new generation. Rather than focusing on a series of reunions in a married-but-not-to-each-other couple's relationship over many years, Danish director Lone Scherfig's ONE DAY covers a somewhat shorter period of time in a relationship between two British friends (Anne Hathway, Jim Sturgess) following a casual one-night stand, using the day of their meeting as the recurring anniversary. What is most intriguing about the story and film is that this relationship doesn't work; it's important to the lives of both people, it might have mattered significantly and perhaps does anyway, but it never quite superceded their own selfishness in the great scheme of things. Consequently, they never quite become a couple, aren't always together on said day, and there's no particular constancy or harmony in the relationship. Furthermore, Sturgess' character starts out at his most together (a collegiate charmer) and then disintegrates over the course of the film as he drifts away from Hathaway to pursue other women, drugs and a short-lived success as an MTV-type host and whatever such people become when their hip factor expires. His arrogance and selfishness make him unsympathetic, really, and his portion of the film often feels insufferable as we're steered to a final port of wasted lives and, worse still, wasted time. In the end, the whole hardly seems worth romanticizing, if all this aggravation counts as a romance. 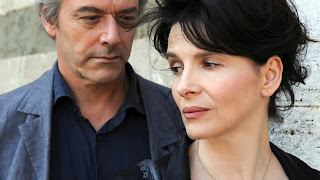 I'm a newcomer to Iranian filmmaker Abbas Kiarostami's work, but this film seduced me completely. An English author (William Shimmel) comes to Italy to give a lecture about his newest book, an essay on the value of copies over original works of art, and takes a day-long drive into the countryside of Lucignano with a somewhat frazzled French guide (Juliette Binoche), filled with deep, diverting conversation about life, art and relationships. At one point in the dialogue, their relationship suddenly changes and the viewer is left to evaluate who they really are to one another and why so many of us base our relationships on others, forging a copy, rather than being true to the original chemistry we form with another person. That neither character is particularly revealing or likeable somehow makes the whole even more stimulating. This is that rare contemporary film which has the boldness I associate with early 1960s European cinema; it breaks new narrative ground and plays some tricks too original to likely be repeated. An invigorating surprise.

Viewed via Criterion Blu-ray, which includes a welcome selection of extras, including a nearly hour-long making-of documentary. Also available on DVD and as an Amazon Instant Video. 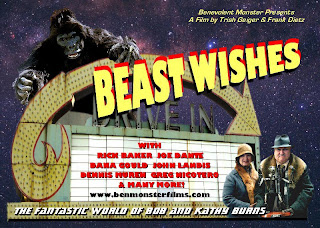 As I told filmmakers Frank Dietz and Trish Geiger after this film's hugely successful east coast screening at Wonderfest, which won them a standing ovation: "Don't change a frame of it. You have captured two angels in a bottle, and it can only do good."


Viewed via digital projection at Wonderfest.
at 12:35 PM 1 comment: