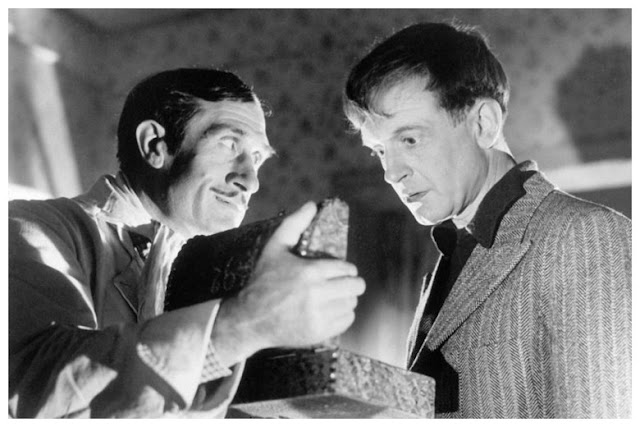 The name of Maurice Tourneur is fairly well-known in America, but moreso for his relationship to son Jacques than for his own important body of work; indeed, I daresay his film La Main du Diable ("The Devil's Hand"), made the same year as Jacques Tourneur's THE LEOPARD MAN, is known at few American horror fans, yet it is superior to any horror picture produced by Universal in the 1940s, and at least the equal of most of those produced at RKO that same decade. It has the fairy tale aspects of THE WOLF MAN, the noir aspects of SON OF DRACULA or CAT PEOPLE, but it also has a fantastical reach that parallels that of THE DEVIL AND DANIEL WEBSTER, incorporating into its makeup signature touches that extend back to the Expressionism of the 1920s and forward at least a decade. In its witty and somewhat condescending depictions of common people, it evokes something of James Whale, but there are also hints of Murnau, Cocteau, and Powell & Pressburger. I feel I caught up with it extremely late, yet there is so much about it that took me very pleasantly by surprise.

The story is told in flashback to a group of travelers who happen to be stranded in a snowbound inn in the mountains, conjuring a feel of Whale's THE INVISIBLE MAN. Pierre Fresnay plays Roland Brissaud, a poor painter who, at the end of his rope, acquires from a chef (André Gabriello, pictured with Fresnay) a box that he is promised will completely revolutionize his luck. The cost? Only one nickel. The box contains the severed hand of the Devil himself and Roland is free to use it, no loss and all gain, for three years -- but he must sell it for less than he paid for it before that time runs out, or the Devil will claim his soul. To his absolute surprise, the purchase works as promised, and the beautiful woman who formerly refused to pose for him not only accepts his offer, but becomes his lover and agent. Seeing that his own name lends his exciting new work no value, Roland sells his new satanic work under the more promising and mysterious name Maximus Leo, and soon all of Paris is flocking to his exhibits. In time, he begins to believe that he is Maximus Leo and no longer needs the hand, which is when his troubles truly begin. The film attains its most intriguing and delightful passage when Roland is taken to a cosmic tribunal where he meets and hears the stories of all the hand's previous owners throughout history.

Photographed by Armand Thirard (who shot most of Clouzot's and Vadim's most famous pictures), who masterfully juggles elements of the fantastic and the pragmatic without one ever bearing too much against the other. Among the supporting players is Antoine Balpêtre, looking much younger than he appears only 14 years later in the first Italian horror film, Riccardo Freda & Mario Bava's I vampiri (1957).