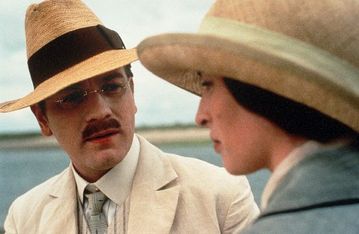 I regret to say that -- despite being an experienced reader of James Joyce, and interested enough in his body of work to have read his letters and numerous books about him, including Richard Ellmann's unmatched biography -- I found this Irish-produced biopic about his early years with Nora Barnacle almost immediately forgettable. Ewan McGregor's casting as Joyce surely got the film produced, but he's a bad choice, failing to embody the Joyce preserved in photos, which show us a shabby man dressed in a kind of casual, shabby style. The clothes in this film are too fresh, too clean, too pressed to convey a sense of the real people, as if the producers were afraid something closer to the truth might reflect badly on their ability to make an attractive film -- and consequently, McGregor comes across as rather louche and unlikeable, long before his jealousies concerning Nora's previous sexual experience get the better of him. (And his singing voice hardly lives up to the accolades won by Joyce's own singing.) Susan Lynch fares somewhat better as Nora, though she's not the bulkily built woman in the pictures either. Owing to the casting of attractive players as historical personages who weren't so attractive, but somehow managed to be robustly sexual people, the film also deprives itself (and its viewers) of the surprise one finds in reading Joyce's boldly erotic love letters to Nora. So what else is there? Some scenery and not much more.