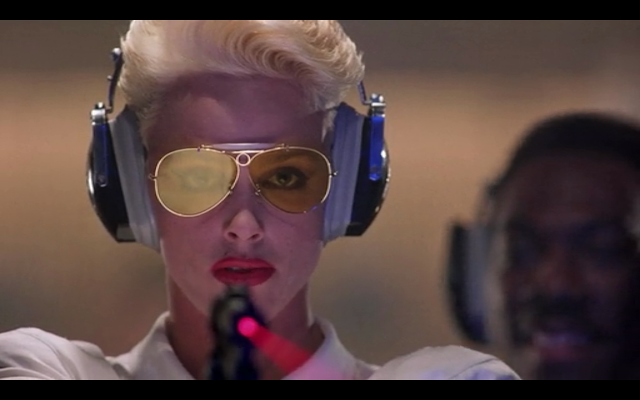 I don't think much of the SATURDAY NIGHT LIVE line of comedies in the first place, but this sequel has a Rat Pack sloppiness about it, in that few of the returning cast members can be bothered to act or contribute to a believable story. Eddie Murphy's a-gigglin' and phonin' shit in, while Judge Reinhold and John Ashton lurk guiltily in his periphery like actors playing hooky, who have sneaked into a party and must follow Eddie's mischievous lead or risk getting tossed out. There is a negligible story about Axel Foley (Eddie's character) investigating an attempted hit on Ronny Cox's police chief character, which brings in some surprising talent -- Jurgen Prochnow, Brigitte Nielsen (looking like a De Palma girl in her most impressive screen outing), Dean Stockwell -- but they aren't given much to do but wear good-looking clothes. The whole film gleams like a Ferrari under the direction of Tony Scott, a more stylish filmmaker than normally got anywhere near comedy at the time. His out-of-towner's eye results in views of Los Angeles that make the whole city look like Rodeo Drive. It's not very good, but it's interesting to look at.