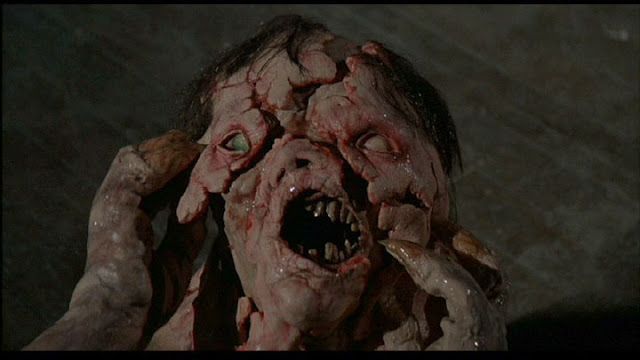 Dino de Laurentiis brought Italian director Damiano Damiani (THE WITCH IN LOVE, A BULLET FOR THE GENERAL) to the States to direct this sequel to THE AMITYVILLE HORROR. The casting of the film sets up a far more interesting story than Tommy Lee Wallace's script wants to tell. In terms of the narrative, a family with three children (two of them teens) moves into the now-abandoned house and strange things start happening: Sonny (Jack Magner), the eldest of the kids, undergoes a devilish personality change that begins with him asking his sister (Diane Franklin) to remove her nightgown (she does! she's happy to!) and ends up with him fully possessed, even changing physical form, while stalking his family with a shotgun, and shedding his skin in some pre-Brundlefly spfx. Unfortunately, the casting of Burt Young as the family's short-tempered father subverts everything, as his barely subdued violence places his family under a dark shadow of abuse before they move into the house. The movie is surprising at times, pushing some unexpected buttons -- incest, patricide, fratricide, even Young telling off the local priest (James Olson) during his first welcoming visit -- but I found it impossible to believe for a second, and much more readily laughable.