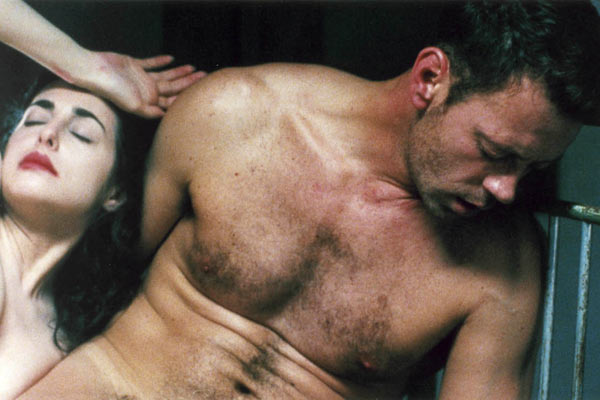 By and large, I like or am intrigued by the work of Catherine Breillat, but this, one of her best-known pictures, probably owing to its sexual explicitness, is one that eludes me -- and yet this could be construed as proof of its success, and perhaps mine as a human being.

Based on her novel PORNOCRACY, which I've not read, it's the simple story of a woman (Amira Casar) who is rescued from a suicide attempt by a gay man (Rocco Siffredi), whom she subsequently hires to attend her for four sequential nights, during which she strips and soliloquizes about sex and sexuality in ways that prompt them both to explore their mutual revulsions. The woman flaunts herself (via Casar's body double) to a man unlikely to respond to her, and engineers a torturous, exploratory experience for them both that leads to a place of mutual intimacy and flashes of compassion. It's been called a work of anti-pornography, a film that deobjectifies the body, but I find it moreso about what happens to people when they pursue a lifetime of sex based solely in physical attraction, without love. I applaud the film for its willfully literary, conjecturing, confrontational nature, which has become still more uncommon in the near-decade since it was made, but it presents a complete demystification of the erotic, deconstructing male and female carnality beyond the point of crudity, and is a punishing experience overall.

Watching as a straight male, it was curious for me to find a completely nude and visually available woman so unappealing and the male character so much more attractive and vital. It would be interesting to see this film remade by a man sympathetic to Breillat's intentions, because I can't help feeling that the man is objectified here in ways the woman is merely... autopsied. All in all, one of those films that might push one to seek out interviews, but is unfulfilling in itself; a kind of necrophilia story with two hearts beating instead of one.