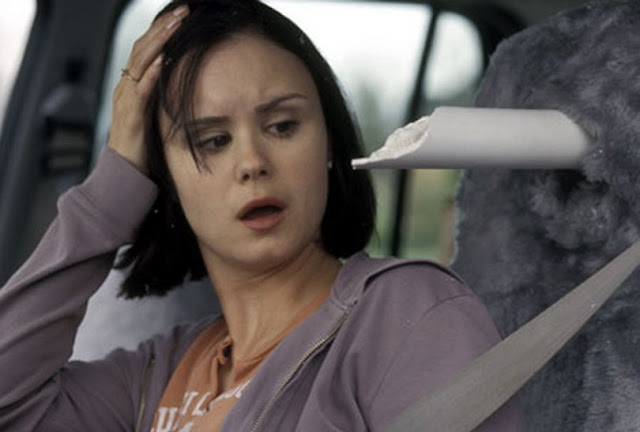 I may be the co-publisher and editor of a film magazine that leans toward horror and the fantastique, but given what they so often are, I generally steer clear of today's horror franchises, which aren't particularly representative of the special thrills I come to the genre to enjoy. This (it's 10 years old already?) is the only film in the Final Destination franchise I've seen, and I watched it in preparation for my interview with Quentin Tarantino, who included it on a recently compiled list of his Top 50 Favorite Movie Sequels (see VIDEO WATCHDOG 172). Though it didn't make me want to seek out the others in the series, I thought it was well-constructed entertainment -- gruesome TV for the big screen, so to speak -- and I particularly admired the thorough (and thoroughly nasty) planning that went into the elaborate design of its show-stopping "chain reaction" highway accident sequence. Mario Bava fans should particularly give it a look; not because of any instances of garish lighting, but because it's essentially a reworking of his BAY OF BLOOD (aka TWITCH OF THE DEATH NERVE, 1971) -- except the "13 characters, 13 murders" concept all happens in the early part of the film, with the balance of the film concerning Death's pursuit of those occupying the next ring of the ripples sent out from that opening catastrophic scything.