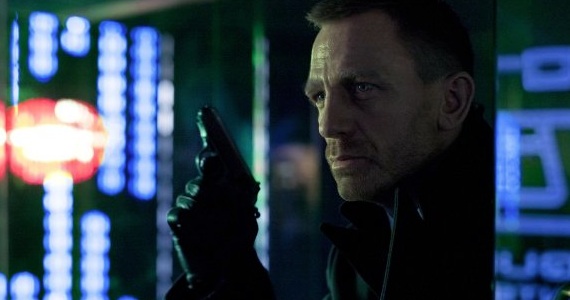 I'm not convinced this is Daniel Craig's great Bond film -- after shooting it, he told a reporter that it felt like his GOLDFINGER -- but GOLDFINGER wasn't Sean Connery's great Bond film either, nor is it Craig's favorite; it was one of the greats, and SKYFALL stands a good chance of becoming/being one of Craig's.

What surprise-director-choice Sam Mendes has done is admirable for its willingness to tamper with the formula, for doing well what the series has always done best, and for crossing some serious lines that can't be uncrossed, from introducing details of Bond's back story to elements of the homoerotic -- all decisions which genuinely move chess pieces of the franchise forward. If Adele's theme song seems to just lie there warbling, its close DNA fusion with the Bond theme holds it in the memory like some of the more legitimately haunting Bond music, and Thomas Newman's score, alternately familiar and exotic, sumptuous and brittle, feels both comfortable and bracing. Cinematographer Roger Deakins (who worked his way here via the Coen brothers) is perhaps the film's most valuable player, pulling off any number of visual tours de force, particularly during the scenes in Singapore that bridge the first act to the second with the introduction of Sévérine, a Eurasian prostitute played by Bérénice Lim Marlohe, whose hardened vulnerability, masked with just the right amount of overdone eye makeup, makes a near-series-best Bond Girl impression in an extended barside dialogue scene that establishes her, and our dread of Javier Bardem's breezily psychotic villain Silva.

I am resigned to possibly never knowing if the final act is a misstep or not. Its insights into Bond's past, avoided by the series lo these past 50 years (!), have their basis in Fleming's books but feel weirdly non-canonical being introduced after so long cultivating Bond as a man of mystery. And the last-minute identification of Eve (Naomie Harris) as a series regular, and one whom we saw interacting with Judi Dench's M in Pierce Brosnan adventures, is not only a tad too cute but chronologically confusing -- which makes its feeling strangely "right" all the more aggravating. All in all, while I think I can safely say it's no CASINO ROYALE, it's richer in places, and I was pleased. Whatever elements of aggravation it may possess are so modest, they won't seriously get in the way of its appreciation as one of the latter-day Bond triumphs.