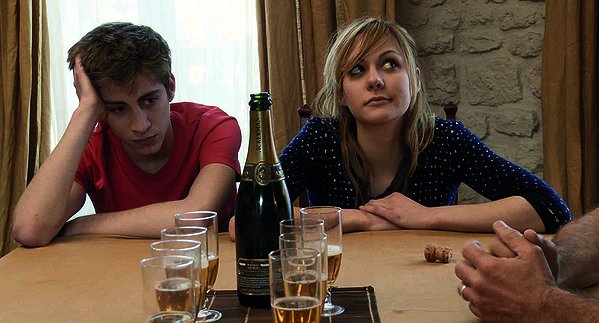 As its title suggests, this film -- co-directed by Pascal Arnold and Jean-Marc Barr -- responds to the curiosities of its sexually isolated, thus troubled, teenage virgin protagonist, Romain (Matthias Melloul), by snooping into the way sex figures in the lives of all its members -- his parents, his bisexual older brother, his adopted sister and widowed grandfather. When Romain is suspended from school for using his cellphone to film himself masturbating in class, his mother Claire (Valérie Maës) determines that more open sexual communication in her heretofore conservative family has become essential. In some ways, her probing is shown to be a healthy thing -- it opens previously closed lines of contact between herself and her husband's father, for example -- but elsewhere, as with the gay son, it's met with a firm insistence on privacy.

The characters are vivid enough but the story doesn't amount to very much, other than a curiously anthropological study of how -- if we accept this family as a rule of thumb -- sex mutates over a lifetime from vulnerable contact with another person (as in Romain's eventual deflowering by a slightly more experienced girl, played by Adeline Rebeillard) to experiment (the bisexual brother is seen involved in ménages a trois and pleasuring himself to internet porn) to role-playing (as between the parents, who use a lot of fantasy and drama in their trysts) to a business arrangement (the grandfather, not wishing to tarnish the memory of a long marriage with a new relationship, visits a prostitute); that is, a gradual estrangement from real sharings of the self. And yet, when the father thoughtfully leaves a packet of condoms in his son's bedroom, knowing that he's invited his new girlfriend to dinner, it's not an opportunity for a coarse laugh but a loving act.