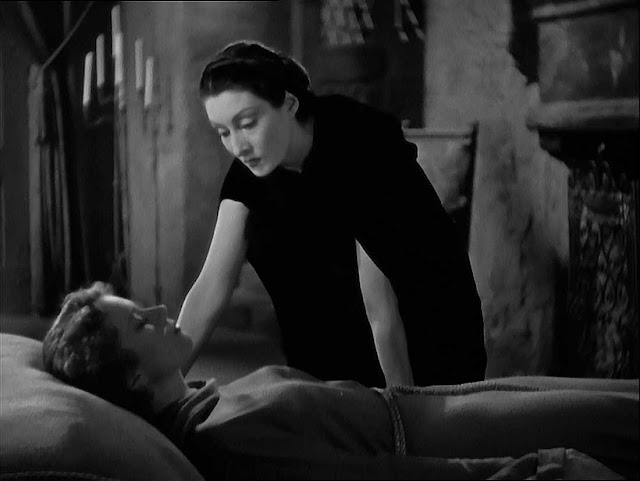 I watched this sequel to 1931's DRACULA because it was chosen by my friend and colleague Richard Harland Smith as the film he was going to present during his guest host appearance on Turner Classic Movies last month. Also, it's the only sequel that Quentin Tarantino admitted was an important "human error" omission from his list of Top 50 Favorite Movie Sequels in the current VIDEO WATCHDOG (172). I've reviewed this film in greater depth for VW 27, so I won't do that here all over again, but I will make a few comments as regards how I feel the film plays for me now.

The vampire subgenre was so young when this film was made, it's almost like this is where it properly began to pick up speed and cut deeper. As RHS said so well during his post-mortem on the picture, it's at its best when it shows the Countess Marya Zaleska (Gloria Holden) exposing her staked father's remains to a crucifix (her own gaze averted) prior to cremating him; in Richard's words, it showed some of the things vampires "do for one another." Its other highlight is a memorable sequence that depicts the Countess coming to the apparent rescue of a hungry homeless young woman (Joe May favorite Nan Grey), whom she invites to her studio for a meal and the promise of cash if she poses for a portrait, leading to a confrontation that's often overplayed by commentators as a lesbian scene. (I suspect the scene was so written because a female vampire would have to seduce a male victim, thus making such a scene more explicitly sexual, whereas this way, she can more easily overcome someone of her own sex, who's weak from malnutrition anyway. There is a request that the model go behind a partition to disrobe, but if you approach the scene in alert search of lesbian content, you'll be disappointed. They are two women, and one of them does have an erotic aura that noticeably dims around men, but that's all you get.) The female vampire template was more memorably sketched the previous year by young Carroll Borland in Tod Browning's MARK OF THE VAMPIRE; Gloria Holden -- older, more thickly built and more dour of expression -- seems less vampiric than proto-Goth with a strong Sapphic vibe. Otto Kruger is the crustiest leading man Universal ever dropped into one of their horror films, but his THIN MAN-like banter with sassy secretary Janet (Marguerite Churchill) is a pleasure, as is Irving Pichel's sepulchral sidekick Sandor.

Though director Lambert Hillyer (who also directed THE INVISIBLE RAY but specialized in Westerns) does a good job of dovetailing this sequel with its predecessor, it does suffer a bit from a preponderance of "I'm uncomfortable with horror" humor and lots of "meanwhile, back at the ranch" cross-cutting. In short, I find it losing some of its lustre as a horror classic, but I'm not saying it's without points of abiding interest.