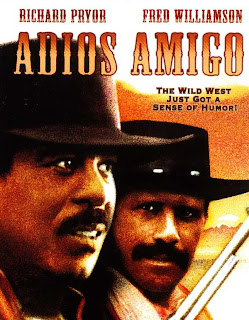 Fred Williamson wrote and directed this comic Western, which had the clever idea of casting Richard Pryor as the "wily rascal" arcana character familiar to Italian Westerns (usually in the form of Eli Wallach), but unfortuntely, much of the film seems improvised, just as the camera often seems to be on automatic pilot.

The set-up is shaggydog simple: Williamson -- exuding his usual buff charisma -- is Big Ben, an honest cowboy minding his own business, who persistently gets blamed for the nearby misdeeds of one Sam Spade (Pryor), who shows a tendency to leave him in the thick of trouble with the salutation found in the movie's title.

I personally felt ripped off by the fact that Williamson cast actor James Brown in the film, in a minor role (they're all minor except the two leads), and made his name large in the advertising, surely misleading thousands of movie-goers into thinking the Godfather of Soul would eventually come along and teach knucklehead Spade a lesson. There's an amusing sequence that finds Spade invited to share food at the encampment of an old man and his two gorgeous daughters, starved for male companionship, but all in all, this was suffering to sit through. The film isn't done any additional favors by the video transfers in circulation; even on DVD, the scope framing is missing roughly half of its original image content.