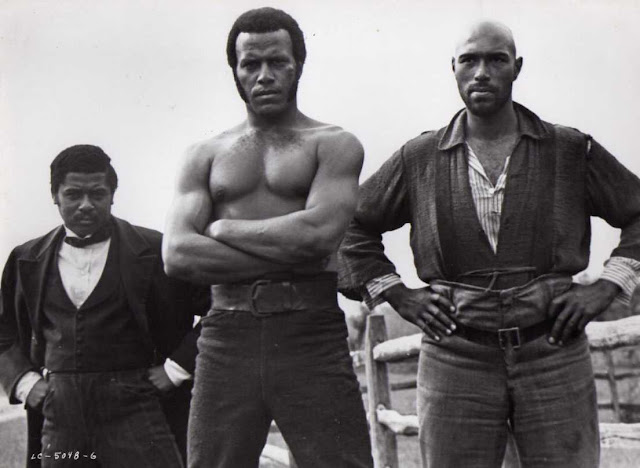 In researching a sidebar article looking into the roots of DJANGO UNCHAINED, I felt an obligation to learn more about the screen career of former athlete Fred Williamson. Some titles were disappointing (like the aforementioned ADIOS AMIGO, #207), some made something good out of very little (like the Williamson-directed sleeper JOSHUA), and then there were the Nigger Charley pictures, which began with this fairly impressive saga, which I think would be more favorably remembered today if it had a less inflammatory title and hadn't opted to score its lovingly drawn images with funk tracks to drive home the idea of how relevant this story hoped to be to black audiences of the 1970s.

Acquitting himself well in his first starring role, Williamson plays an enslaved blacksmith who is granted his freedom on his slavemaster's deathbed, thanks to a request from his mother (who selflessly refuses his offer of freedom for herself), only to discover that freedom is something an African-American of his era must fight for every day of his life. With his slavemaster dead, Charley's writ of freedom is torn up by the original master's more hateful son Houston (IT'S ALIVE's John P. Ryan), who intends to keep him and has him whipped -- leading to a fight in which Houston is accidentally killed. With two fellow slaves (D'urville Martin and Don Pedro Colley, pictured), Charley runs away in search of a place where they might start a new life, but they encounter so much hostility from most white townspeople, they're goaded into embracing an outlaw lifestyle. In time, they are asked to work as live-in ranch hands and security guards for a white farmer (Doug Rowe) and his beautiful halfbreed Native American wife (Tricia O'Neil), who are being harrassed for their mixed marriage by members of a Klan-like organization led by a racist Reverend (Joe Santos). Thomas Anderson both lightens and deepens the tone of the picture as a supposedly halfbreed drunkard named Shadow, initial comedy relief who later, in a more vulnerable moment, admits to being of African descent and so old that he had to start passing for red (or pink, as it were) to soften the blows that have followed him his entire life.

As with a lot of Williamson's 1970s work, this film isn't generally available in optimal condition. The most common version around was edited for television, its mild cursing bleeped while the really hateful language was left intact, lending it even greater heat. Even in this less-than-ideal presentation (which can be found on YouTube), this is an entertaining, well-made, and reasonably thought-provoking film, worth tracking down.