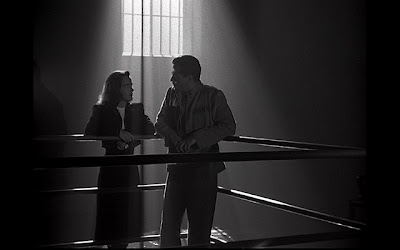 Based on a 1942 novel written by Cornell Woolrich but attributed to "William Irish," this Universal picture is one of Robert Siodmak's great films noirs -- his first great film noir -- made immediately following his excellent proto-noir horror picture, SON OF DRACULA (1943).

Like Woolrich's 1937 short story "I'm Dangerous Tonight," which was about a red dress that made a literal femme fatale out of a woman who wore it, PHANTOM LADY pinges on the element of extravagant fashion. When businessman Scott Henderson (Alan Curtis) is wrongly arrested and convicted for the murder of his wife, his devoted secretary Carol Richman (Ella Raines) sets about locating his only alibi: an unknown woman wearing a peculiar, one-of-a-kind hat, with whom he had been sharing some innocent conversation in a bar at the time of the killing. Siodmak follows this wholesome young woman on her crusade as if into annexes of Hell itself, searching for clues, placing her own innocence at risk, and increasingly placing her trust in her boss's business associate Jack Marlow (Franchot Tone), who -- plainly to us, but not to her -- turns out to be the real killer.

Associate produced by Joan Harrison, a former and future associate of Alfred Hitchcock who had in fact served as his secretary a decade earlier, the film contains sequences of darkish, quietly sinister atmosphere that shows the influence of the films being produced over at RKO by Val Lewton, especially the two from the previous year: Jacques Tourneur's THE LEOPARD MAN and Mark Robson's THE SEVENTH VICTIM. It also shares something of the element of a wholesome dream turned horribly wrong, like Hitchcock's SHADOW OF A DOUBT, also from 1943. The key instance in this regard is a justly celebrated sequence where Carol, masquerading as a loose woman, entices a drummer (Elisha Cook, Jr.) who may have seen the "phantom lady" and her companion and gets invited to a private jazz session -- the scene, which reaches a frenzied pitch, seems to look back to G.W. Pabst's films with Louise Brooks and ahead to Rainer Werner Fassbinder's with Hanna Schygulla and Barbara Sukowa at the same time. The climactic cat-and-mouse game between Tone and Raines is not played out at that level, of course, but it's suspenseful all the same and staged in a stylized apartment that looks like the killer's mounting migraine.