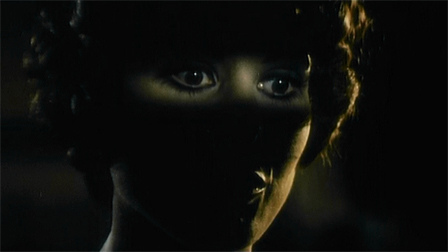 In brief, it's an ambitious return to the sort of existential horror film Margheriti had made with CASTLE OF BLOOD (DANZA MACABRA, 1964), where you become increasingly unsure how many, if any, characters are dead rather than alive. The Blackwood family of that earlier film is mentioned as part of a back story, which may connect the literary basis for this endeavor to Algernon Blackwood, as CASTLE OF BLOOD was. (It was an original story with its basis, if you will, in Blackwood's "The Empty House.")

But here's the complicating factor: CONTRONATURA bears considerable, surprising resemblance to Mario Bava's LISA AND THE DEVIL (1973), an arthouse-grindhouse hybrid that -- until now -- has been regarded by English-speaking fans as virtually sui generis within the horror genre. It's like the two films tell different stories adapted from the same literary source (possibly something by Blackwood). Like LISA, CONTRONATURA is set in an unspecified time that appears to be the 1920s and follows a carload of strangers on a strange journey to the end of night. Their limousine breaks down outside a secluded villa owned by a blind mother and her strange son, where they take shelter for the evening, during which they serially confront their relationships to one another and receive intimations and reenactments of a past life that resulted in their damnation. In this case, the mother is an aged crone hovering with dead eyes over a deck of tarot cards, and her son is played by Alan Collins (real name Luciano Pigozzi), the Italian Peter Lorre and a Bava crony from the early '60s who is indulged with one of his best and biggest roles. Making their similarities all the more impossible to dismiss, both films were scored by Carlo Savina, who (mischievously?) subsequently slipped one of the weeping, viola-driven cues he wrote for CONTRONATURA into LISA!

It adds further fuel to one's suspicions that CONTRONATURA was made the same year that Margheriti took over NAKED YOU DIE (THE YOUNG, THE EVIL AND THE SAVAGE) from Bava, accepting screen credit as writer for a film that Bava actually co-scripted with Tudor Gates. (I know; I've read it and compared it to the finished film.) Margheriti is likewise credited with the story and screenplay of this film. The question hovers: Is it his work?

Whatever its true patrimony may be, CONTRONATURA is up there with CASTLE OF BLOOD as one of Margheriti's most unusual and ambitious horror titles -- until the ending, which suffers from some inadequate flooding special effects by the director himself. It deserves to be more widely seen.