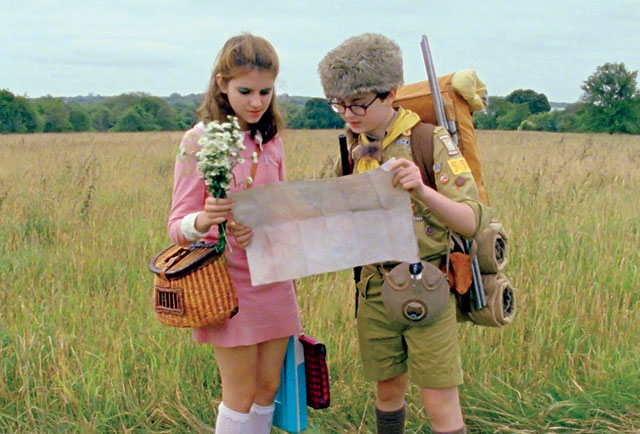 In this original script by director Wes Anderson and Roman Coppola (CQ), two 12 year olds -- orphaned scout Sam (Jared Gilman) and bookish recluse Suzy (Kara Hayward) -- meet cute backstage at a play, and remember each other. Neither of them is happy or understood by the grown-ups in their lives, so they turn to each other, commencing an industrious correspondence that turns intimate and romantic. They decide to run away together and live in the wild on Sam's scouting skills. Their absence frightens the adult supervision in their lives (Bruce Willis, Bill Murray, Frances McDormand, Edward Norton), not least of all because it makes them appear irresponsible (the panic forces McDormand's extramarital affair with Willis out into the open), and they initiate a wacky search while the two children play house in a charmingly isolated inlet of their New English island.

Anderson's films tend to settle in a ring of quirkiness just slightly outside my range to fully appreciate, though never quite far away as to alienate me. I watch all of his movies -- not just THE LIFE AQUATIC -- in much the same bewildered yet fascinated way I would watch a television special about sea life found so far down that it requires its own luminosity. I can empathize with his subject matter, especially when it's personal as with this film or RUSHMORE, but his visual style reminds me strongly of folk art and I suppose that's not something I am eager to see move around.

For all that, I kind of loved this film, which -- in its use of familiar actors in cartoonish roles, and in its service to social satire -- reminded me strongly of the work of Preston Sturges, while the visual style, recognizably Anderson, had an alluring reason for being so, as an outward projection of the appealingly primitive illustrations in one of Suzy's storybooks. Perhaps one she'll someday write herself as a memoir of this adventure.