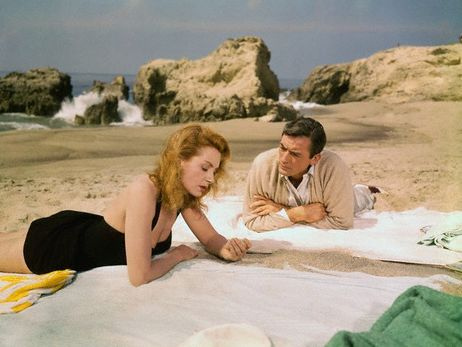 Produced by Jerry Wald, Henry King's adaptation of Sheilah Graham's candid memoir of her affair with novelist F. Scott Fitzgerald is one of those Hollywood biographies so symptomatic of the 1950s: it deals with heavy dramatic issues like mental illness, extramarital love, money trouble, creative and sexual frustration and, above all, the ugliest sort of alcoholism, but it is so fundamentally a "woman's picture," one mostly feels the windswept narcissism of the protagonist. To see this film, as I did, in fairly close proximity to Deborah Kerr's subsequent work in THE INNOCENTS, one can see how toiling in high-profile, undemanding projects like this could encourage her to give so much more of her talents to those rare films that were genuinely worthy of her. Gregory Peck, badly cast as Fitzgerald but someone who had worked extensively with King on other pictures, doesn't make a convincing drunk, much less a convincing writer.

The film is most interesting not for its disclosures about Fitzgerald, but for its revelations about Sheilah Graham herself. Born Lily Shiels to slum-dwelling parents in Leeds, England, she is introduced as a single, independent woman who brought a self-taught posh accent to America with a book of clippings and fake references that tied her to those north and south of British royalty and basically fibbed her way from newspaper reporter to Hollywood columnist. (The film depicts her as second in popularity only to Louella Parsons.) It's extraordinary to think that Graham would have surrendered in her book those very secrets that were the foundation of her success, but further research shows she didn't surrender them all, at least not in this movie. The film shows her being kissed on the head in farewell by one "John Wheeler" (Philip Ober), but their relationship is not established, glossing over the fact that Graham's relationship with Fitzgerald began in her last year of marriage to John Graham Gillam, to whom she had been married since 1923. The film acknowledges that Fitzgerald entered into their relationship when his wife Zelda was institutionalized, but it does not admit to Graham's marital status, much less its duration. Though their cohabitation lasted from 1936 to 1940, the film -- shot inexpensively in available spaces like the 20th Century Fox studio lot, on the beach at Malibu, and on the winding streets of the Hollywood hills -- makes no attempt to suggest a period piece.

Shot in 2.35:1 CinemaScope by a seldom inspired Leon Shamroy (SOUTH PACIFIC, PLANET OF THE APES), BELOVED INFIDEL is handsomely presented on Blu-ray by Twilight Time, a label specializing in isolated music soundtrack releases. In this case, the score is by Franz Waxman and one can watch the film on disc with its original four-track stereo mix (unusual for its time, and pleasantly old-fashioned) or with the music isolated in stereo, complete with Waxman's countdowns and bits of studio chatter. With extensive liner notes by Julie Kirgo and an original theatrical trailer that presents Peck, out of character, referring to Kerr as the film's "Beloved Infidel." In fact, it's Fitzgerald who is depicted as breaking faith with Graham, when a professional disappointment latches him back onto the flowing teat of his other mistress, a whiskey bottle.