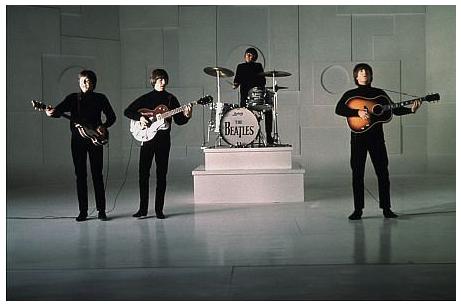 For decades now, the accepted wisdom has been that A HARD DAY'S NIGHT is the great Beatles film, while the second one, HELP!, shoehorns them into a silly plot in ways not nearly so innovative. I have long sought to redirect this unfounded opinion. While it's true that, in 1964, no one had seen a youth culture film quite so energizing or liberating as A HARD DAY'S NIGHT, it was not without plot contrivances of its own -- Paul's "very clean" grandfather (Wilfrid Brambell), for starters -- and it was given a black-and-white newsreel look that, combined with a set of songs written hastily and sometimes on demand, does not present the group at their best unless you consider their Beatlemania years their best. HELP!, on the other hand, opens by cocking a flagrant snoot at its predecessor, as black-and-white performance footage is suddenly interrupted by the color assault of flung darts.

It's a showcase for the ravishing color cinematography of David Watkin (THE DEVILS, OUT OF AFRICA), working in color-coded concert with art director Ray Simm and wardrobe designer Julie Harris, which more fully captures the spirit of the era -- not just the Beatles, but Carnaby Street and James Bond. The newsreel realism of HARD DAY'S NIGHT is also replaced with a more freewheeling surrealism, where the Beatles all live together in a common room behind a false row house façade, where pianos suddenly appear in the snow or rise up out of floors with JIMMY OLSEN comics where the sheet music should be, where recording studios are set up out of doors near ongoing military maneuvers, where spies in pink fire guns of matching pink, and where Paul McCartney can be shrunk to an inch-tall by a parfait-like drug in a lurid hypodermic, wielded by a scientist (Victor Spinetti) who hopes to -- dare I say it? -- rule the world. It's true and well-documented that the Beatles were much enjoying their pot by this time and their self-indulgence made the production harder to control, but their performances certainly don't suffer and the songs they bring forth are noticeably more mature and innovative than the previous batch. Much like The Monkees' HEAD (a film it particulary influenced, being about a rock group's escalating paranoia with success and recognition), HELP! is also one of the most deliciously quotable comedies of the 1960s. My favorite: "I thought she was a sandwich till she went spare on me hand." Director Richard Lester (approaching peak power here) credited screenwriter Charles Wood (working with Marc Behm, who provided the silly story about Ringo getting a sacrificial ring stuck on his finger) with the witty dialogue and kept him in harness on HOW I WON THE WAR, THE BED-SITTING ROOM and CUBA.

Two strange facts: 1) A HARD DAY'S NIGHT never verbally refers to the group as The Beatles; the group name doesn't appear onscreen until their climactic performance. And 2) in HELP!, the four stars of the film were not only identified as The Beatles throughout, but billed solely as such. Lennon, McCartney, Harrison and Starr were so famous, it didn't matter that they weren't given individual screen credit for their acting.