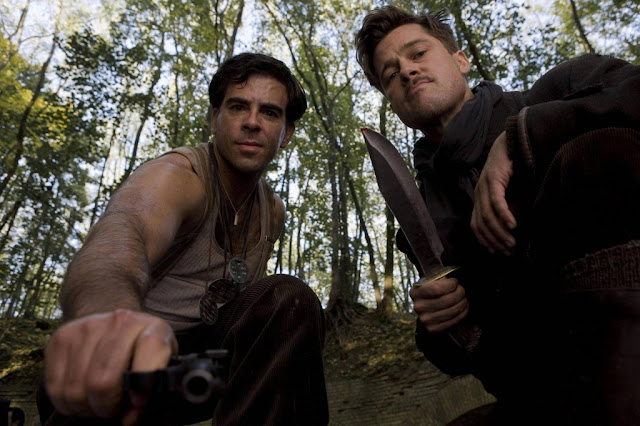 I've now seen this Quentin Tarantino picture three times and, though it unfolds at a far more leisurely pace than his earlier work, it is such rich earth and it continues to give rise to new ideas and insights each time I see it. All of Tarantino's work flaunts its verbosity, its mastery of language, like a fan of bright plumage; it validates him as a writer the way way his knowledge of film trivia confirms him as a lover of cinema; but this is a film about language and how a division of languages can inspire secrecy, deceit, conspiracy and evil. Its use of language also makes this Tarantino's most audacious movie -- for the first seven minutes, and throughout most of its action sequences, it is indistinguishable from a foreign-language film to American audiences. The heroine Shosanna Dreyfus (Melanie Laurent) doesn't speak a word of English, yet this became his greatest American commercial success. Making its success all the more remarkable is that it's not really about what it seems to be about: a plot to kill Hitler during World War II. We attend the story suspecting that, because of what we know about history, the heroine's plot will fail... but when it doesn't, when we see Hitler machine-gunned to death before our eyes, we realize that this is a movie about movies, about the singular ability of movies to bring us catharsis and closure; in the same stroke, it's also about the free-handed way in which movies have traditionally treated history, and -- on a deeper level -- it's about history itself and the impossibility of rendering an accurate history with so barbed and biased a tool as language. The title of the film is grossly misspelled, and the leader of the Basterds themselves -- Brad Pitt as Lt. Aldo Raine (his very name a kind of misheard form of Aldo Ray) -- is a mumbly-mouthed mountain man from Tennessee who is out there fighting the sauerkraut-sandwich-eaters, defending a native tongue he himself has never learned to wield properly, certainly not with the elan of SS Colonel Hans Landa (Christoph Waltz), yet it's so much a part of him, he becomes completely transparent when he attempts to disguise himself as anything but an American.

Anyone who has seen this film will tell you that Christoph Waltz steals it -- in three languages, no less -- and he steals it almost right away and never once relaxes the iron grip of his charm. That said, the role was obviously written for this to happen and it is the only way it could have worked. What is doubly remarkable is that his character manages to more than hold his own amidst a veritable panorama of unforgettable characters and portrayals -- broadly sketched (Eli Roth as the Bear Jew), brazenly named (Mike Myers as "General Ed Fenech"), believably caricatured (Diane Kruger as German actress and double agent Bridget van Hammersmark), and deeply humanistic (Dénis Ménochet as the opening scene's soulful-eyed farmer, Perrier LaPedite), just to name a few. As with other Tarantino films, the film sets itself up as an adventure it has no intention of delivering; the climax is not really the strategic victory of the Basterds, but of Shosanna Dreyfus, and the deliberate disappointment of the set-up reminds me of "Mr. Agility" in the Andrea Bianchi-directed/Jess Franco-scripted WWII adventure ANGEL OF DEATH, who is hilariously wounded before he is able to perform a single stunt! Mélanie Laurent must go on record as one of the most hostile, unlikeable heroines on record -- again, the strict opposite of our silver-tongued villain -- but we never part company with her agenda, which is no less horrific than the Nazi agenda but affords us a spectacle of gratification denied us by history.

The climactic sequence that turns Shosanna's into a velvet-curtained Aushwitz for the Nazi elite is the most operatic, imperiously chilling image in Tarantino's work, and its bloodline can be traced back to the movie theater shelter against the pending Cuban Missile Crisis holocaust in Joe Dante's MATINEE and the locked Berlin cinema mayhem of Lamberto Bava's DEMONS. Some reviewers have remarked that the film's closing line ("I think this just might be my masterpiece") is a little too self-satisfied or self-conscious, but as time passes, it's acquiring the ring of a fairly sober assessment.

You can see me discussing this film at greater length (and Quentin's other films, as well) with a group of colleagues (Elvis Mitchell, Stephanie Zacharek, Scott Foundas and Andy Klein) on the "Critic's Corner" disc in the newly released box set TARANTINO XX.