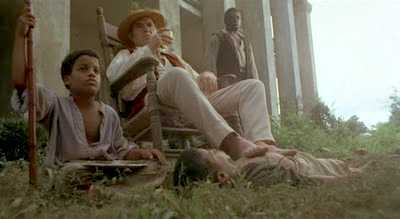 It had to happen. After tying a nice bow on this blog and calling it finished, I remembered two other films I saw recently, while researching my "Roots of DJANGO UNCHAINED" piece for SIGHT & SOUND, which I hadn't included here and must be attached to complete my annual viewing and reviewing.

This highly profitable Paramount release, the last important film directed by Richard Fleischer, has acquired an undeserved reputation as a camp classic, initiated by the GOLDEN TURKEY AWARDS book of the Medved brothers and the nervous titters of other moviegoers who weren't able or prepared at the time to look soberly back on this not-so-distant period of American history. The same discomfort may be apparent in Paramount itself, as MANDINGO was one of the first titles they chose to sublicense to another video company, Legend Films, back in 2008.

Of course there is a great deal about MANDINGO's content that is uncomfortable, awkward, even downright repugnant to modern sensibilities. The 1970s, oddly enough, were more open about matters of race and sexuality, and this film goes further in either area than Tarantino's similarly rooted DJANGO UNCHAINED, though Tarantino's film is an entertainment intending to tease subject matter of lingering sensitivity rather than seriously confront it. (The photo above shows James Mason as slave master Warren Maxwell, using an African-American child to draw the rheumatism out of his bare feet into the child's body.) Mason lords unwholesomely over the film with a greasy accent, but the real crux of the story is the arranged marriage of his son Hammond (Perry King) to Blanche (Susan George), the daughter of a neighboring landowner -- a kind of parallel white enslavement, if you will. The newly-wed Hammond, outraged that his new bride is not a virgin (a gift claimed earlier by her brother, it seems), seeks comfort in the arms of Ellen (Brenda Sykes), the slave girl whom he genuinely loves. Blanche, offended by his flagrant infidelity, takes offense and refuge in alcohol, until she more pro-actively seeks revenge against Hammond and his entire family by tempting the sexual services of Mede (Ken Norton), the somewhat blank Mandingo stud whom Hammond has trained to become a successful bare-knuckled fighter. Tragedy ensues, to say the least.

Ken Norton, the boxer who won an historic 1974 bout with Muhammad Ali by breaking his opponent's jaw and went on to become the world heavyweight boxing champion of 1978, is not an expressive actor but something about his blankness adds to Mede's impression as a kind of livestock being passed and punched around. (Shortly after he's introduced on the trading block, a white widow attempts to buy him and thrusts a hand inside his boxer shorts to feel how sizeably he's endowed - just one of many moments you'd be unlikely to find in a major studio film today.) Mason gives one of his better latter-day performances but King, George and Sykes are especially good, composing a palpably tortured triangle. What is most uncanny about the film is the way it suggests that all this outward, formalized hatred and exploitation was systematized by old white men as a means of making this stolen country grow to their advantage, of making their family businesses (and family itself) flourish, while the distaff side of slavery made the marriages they calculatedly arranged more endurable, channeling their sons' sexual impulses away from interfering with other landowners' daughters. It also shows love somehow surviving, contrary to this system, deep in the shadows of its process -- a germ of truth at the heart of an obscene but constructive social lie.