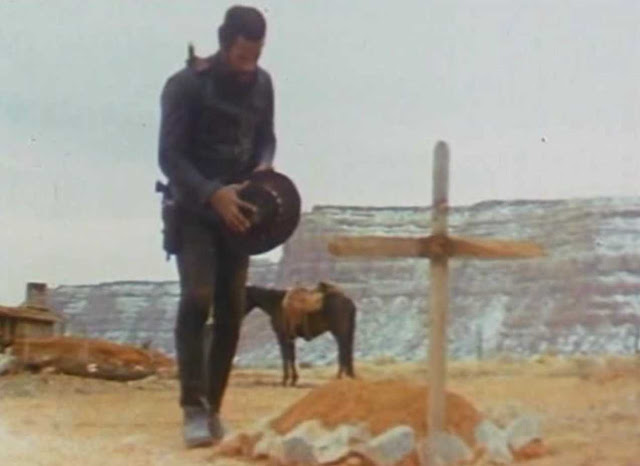 Also known as THE BLACK RIDER, this minimalist black Western -- written by and starring Fred Williamson and directed by Larry G. Spangler (A KNIFE FOR THE LADIES, THE SOUL OF NIGGER CHARLEY) -- is a minor but pleasing hommage to the Italian Western, with some giallo elements included.

The story is simplicity itself. On the day of his homecoming from the Civil War, Joshua (Williamson) arrives at the homestead where his mother (Kathryn Jackson) works as a cook, only to discover that she was shot by a band of outlaws who took a liking to her employer's mail-order bride (Brenda Venus) and rode off with her. A group of lawmen were able to track them only so far, but Joshua decides to track them down to deal out his vengeance and collect the bounty on their heads. In one of the more curious aspects of the story, the bride warms up to her rapist abductors and effectively becomes one of their gang by the time Joshua arrives to offer his assistance. As Joshua avenges himself against his mother's killers, the movie acquires the feel of a body count picture, replete with inventive, ironic death traps. Isela Vega (BRING ME THE HEAD OF ALFREDO GARCIA) has a bit part, but despite her history of erotic screen appearances and the plunging neckline of Ms. Venus, there's nothing here to nudge the picture beyond a PG rating.

As with too much of Williamson's work, most of the presently available home video editions of this film are cropped and crummy-looking, but John Charles tells me that Code Red released a nice looking 2.35:1 DVD of JOSHUA on a double feature disc with CUT-THROATS NINE. The cinematography (uncredited!) and editing are fairly crude, and Mike Irwin's one-track score -- whistle-like noodlings on a synthesizer, showing the influence of Morricone's THE GOOD, THE BAD AND THE UGLY theme -- is so worried to death, it borders on the unspeakable. Despite these faults, there is a sincerity and a laconic cleverness about the project that shines through. If you're at all interested in exploring Williamson's screen work, this is a modest yet key title.